Who is St Margaret? 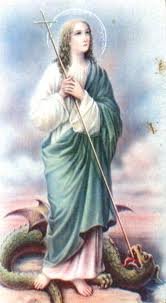 St. Margaret was born in Antioch in Pisidia in Asia Minor. In one version of the legend her father was a pagan priest during the reign of the Roman Emperor Diocletian and her mother died soon after her birth. Margaret was brought up by her nurse, Theotimus, a devout woman, from whom she learned Christianity. Later, having embraced Christianity and having consecrated her virginity to God, she was disowned by her father and thrown out of his house. Theotimus then adopted her.

One day the young and beautiful Margaret, whilst engaged in watching her guardian’s flocks with some of her friends, was espied by a lecherous Roman prefect named Olybius. Olybius, attracted by her great beauty, ordered his servants to kidnap Margaret as he planned to marry her if she was free or make her his concubine if she was a slave. He soon learned that she was a Christian and was repelled. She wanted to convert him but he became angry and had her brought to public trial at Antioch. He asked her to renounce her Christian faith and return to pagan ways. But the holy virgin, though accustomed to wealth, comfort and kindly people, preferred to suffer the agony of the rack and death than to worship the gods of the empire and was imprisoned for refusing to return to her father's pagan religion.

Her tormentors then attempted to burn her, but the flames, we are told in her Acts, left her unhurt. They then bound her hand and foot and threw her into a cauldron of boiling water, but at her prayer her bonds were broken and she stood up uninjured.

She was returned to prison and there she prayed to God that her enemy be made visible to her. At this, Satan appeared in the form of a terrifying dragon and attempted to swallow her. She made the sign of the cross and the cross she was carrying grew enormously causing the beast to burst open. It is probably this part of the legend that has caused this virgin to be widely worshipped for many centuries as a special patron of expectant mothers.

Finally, she was beheaded, along with her many converts, by Emperor Diocletian. Her Acts place her death in the persecution of Diocletian (A.D. 303-5), but in fact even the century to which she belonged is uncertain. She was buried at Antioch, but her remains were taken later to Italy where they were divided between shrines in Montefiascone and Venice.

She prayed at her death that women in childbirth would, upon calling on her, be safely delivered of their child as she had been delivered from the belly of the dragon. She is also known as the patron saint of women, nurses, and peasants. She also intercedes for those who call on her from their deathbed.

She became one of the most popular saints in England in the 9th century when her life was first recorded in English. Some two hundred early churches were dedicated to her, even though her legend had been declared apocryphal by the Pope as early as 494. She was one of the saints who spoke to St. Joan of Arc, and she is included in a group of saints known as the Fourteen Holy Helpers, who are revered for their special ability to petition for people.

St. Margaret of Antioch was one of the most popular saints among the laity in medieval England, primarily because of her association with childbirth. St. Margaret is a common theme for wall paintings in English churches; some having her entire life adorning their walls. St. Margaret is often represented in these paintings as a shepherdess, or leading a chained dragon by her girdle, carrying a little cross in her hand, or standing against the large cauldron into which she was plunged.

The Greek Church honours her under the name Marina on the 13th July; the Latin Church as Margaret on the 20th July.

You can install our app on your smart phone, quickly and easily, without going through the app store.

To install on iPhone and iPad

To install on Android

You can uninstall the app at any time.